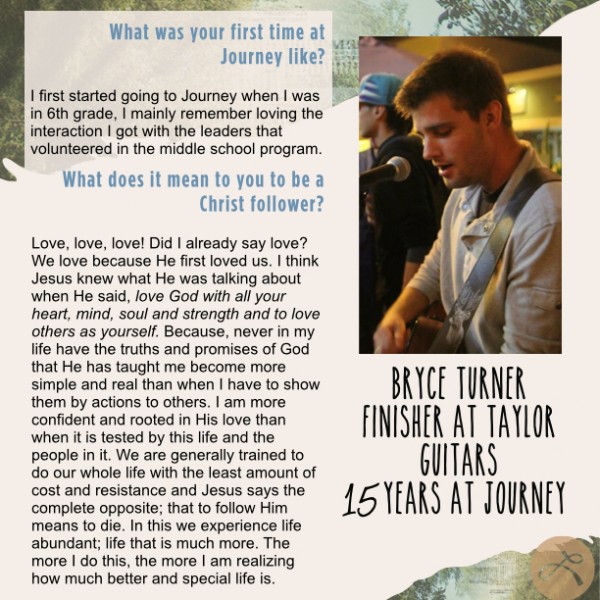 This may sound too simple but Jesus is my biggest passion or maybe I am His biggest passion, I can never work that one out. Anyway, I can say that writing and sharing music is easily my biggest passion in life, I suspect I will do it forever. I can also easily say that it would be without passion if my life did not revolve around Jesus. He has led me down many strange and unsuspecting paths in my short life thus far; many of which I would consider dangerous or stupid. It goes without saying that through it all I am caught up in the biggest wrestling match of my life. He asks me to trust Him. But, all of that continues to fuel my love to write and express what I see, feel, and how much I desire to share it with others through song that maybe they would see, feel and understand this God and this life.

Have you ever taken a leap of faith?

When I started getting to know some people at a Collier Park, I knew God was behind it. I remember feeling so passionate and alive, so amazed at how precious my own salvation was, how lucky I was to know God to know what Jesus has done for me. I started to befriend people who I was told were “illegitimate users”, who turned out to be a lot of young men and woman very much like myself.

I would simply go down to the park at least once a week and sometimes bring a snack to share and just hangout for hours at a time. I soon found out why people were where they were at in life and how they got there as people started sharing their stories with me. Some were living on the streets, in and out of dysfunctional homes, no home, far from home, and some had good families. Whatever it was, this new family I started to become a part of called this park home.

Long story short, I felt so compelled to show love to them in my actions above all and it has turned my life upside down. My understanding of God and Jesus has become so much more real and in turn has changed the way I spend my money, time, and energy. Before, God tossing me into this I was a passerby just the same as anyone and wouldn’t think twice about judging these people I now call family.

There came a moment in my time at the park where I felt so sure that God had asked me to start a bible study. Now up to this point, I had not mentioned God, Jesus or anything to anyone and if it was talked about at all it was shorted lived. People knew I was from church but I felt very specifically that God wanted me to focus on my actions rather than my words.

So, as you can imagine when I felt like God told me to start some sort of bible study I was shocked. I actually thought it was a stupid idea, who is going to want to do that? How would I even ask? But somehow I knew God was asking me. It took me like three weeks to build up the courage to even ask anyone. It started out small but only two people said yes.

So, we met at a Mexican food place and then I realized I had no idea how to do a bible study! Again, long story short it grew and grew. You get the point it grew! Sooner or later virtually everyone at the park was going to this bible study every Wednesday. People have been baptized at every baptism Journey has had; sometimes in pools and sinks. People have gone to Haiti when they were still homeless. A few people from Journey started to get involved and started calling us family as well.

Through that leap of faith many people lives, my life included have been changed. But there are still so many more people that need to be included in this family and feel estranged, both on the Journey side and the park side. I hope one day we won’t be able to tell the difference between the two.