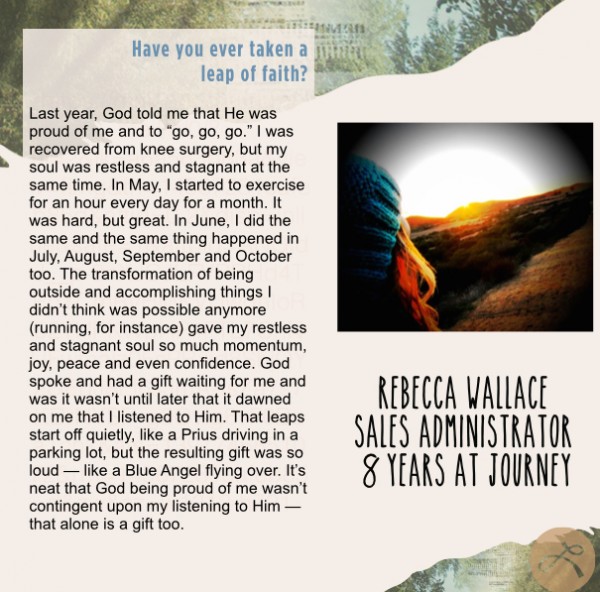 Overwhelming. I grew up in a traditional church with pews and organ music. After I graduated from college, I moved back to San Diego and realized after a year that I was in need of something. I thought it was a “perfect” job, but I realized (when I look back) that it was a deeper need. I decided to church shop and found myself at Journey for the first time. There was a special healing prayer for Mike Burns and people were asked to pray out loud, all at once.  I remember feeling unsure but something must have stuck enough for I returned a month later. In the program, was a flyer for Real Life – a twenty-something group led by Linda Noble at that time. I walked in Real Life in September of 2005 and I didn’t know a soul, including my own. Every week, my prayer group would share on how we saw God working in our lives and it slowly dawned in me that God might actually care about me. That dawn changed my life and my life hasn’t been the same since.

I am passionate about finding beauty.  I love being outside.  A few years ago, I went through a year of loss and I remember going to the ocean on stormy days and feeling like my soul was matched in the turbulent gray waves hitting the rocks. It was like God formed an entire storm just to tell me “I understand,” and I felt my value to Him. I also love and am passionate about finding beauty in people. To me, the most beautiful of places live inside souls. The way my grandpa’s blue eyes light up when he says that he is going to beat cancer, for instance. That is hope, illuminated.

What does it mean to you to be a Christ follower?

Last year, I had a vision during a selah worship service. I was at a potter’s wheel trying to mold my heart. I took my heart and put it in a jar – and it glowed like it was a firefly. I walked, holding my glowing heart, and I gave the jar to God. Suddenly, I saw myself running and I saw myself under waterfalls. Both have represented beautiful restoration in my life. To me, being a Christ-follower means that. Before I knew Him, my heart was on a potter’s wheel and I was trying to form it myself. As I got to know Him, it glowed like a firefly in a jar. And when I gave it to Him, it was a vision of my true self.

I could see that God influenced how I got my current job. I found it on Craig’s list and it was during the recession. At that point, I had been unemployed for six months and had gone through many exasperating experiences trying to get a job. Even though I researched and prepared as best I could, I felt like I was too nervous during the interview. I really wanted the job, but thought I fell short. I was told later that the rest of the interviews were unsuccessful and that I stood out. I should have felt like I was just lucky but it was a feeling that God had enacted a giant orchestra of events. When they called me in for the second interview, I felt at ease. When they offered me the job, it was just as it was intended.

When was a time when you took a risk with your faith?

A couple of years ago, I thought that God would purposefully withhold something I’ve been praying for, I thought He was going to teach me a lesson because I have been so blessed in my life. I thought that I would have to adjust my happiness accordingly. It’s hard to trust God when you feel that way. Now, I don’t see it that way. What I’ve been praying for hasn’t happened, but I feel differently about God now. I don’t think He will withhold it to teach me a lesson. I don’t think I have to adjust my happiness accordingly. I trust God more, His goodness keeps growing and my happiness feels deeper. It is such a risk, to trust God when you have no idea what is going to happen or if my prayer will be answered, but it’s growing inside of me and it won’t stop. I hope it keeps going and going and going.