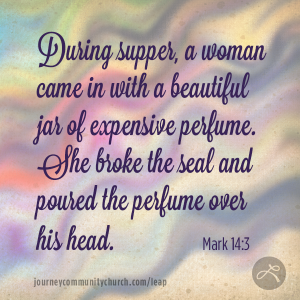 1 It was now two days before the Passover celebration and the Festival of Unleavened Bread. The leading priests and the teachers of religious law were still looking for an opportunity to capture Jesus secretly and put him to death.
2 “But not during the Passover,” they agreed, “or there will be a riot.” 3 Meanwhile, Jesus was in Bethany at the home of Simon, a man who had leprosy. During supper, a woman came in with a beautiful jar of expensive perfume. She broke the seal and poured the perfume over his head. 4 Some of those at the table were indignant. “Why was this expensive perfume wasted?” they asked. 5 “She could have sold it for a small fortune and given the money to the poor!” And they scolded her harshly. 6 But Jesus replied, “Leave her alone. Why berate her for doing such a good thing to me?
7 You will always have the poor among you, and you can help them whenever you want to. But I will not be here with you much longer. 8 She has done what she could and has anointed my body for burial ahead of time. 9 I assure you, wherever the Good News is preached throughout the world, this woman’s deed will be talked about in her memory.” 10 Then Judas Iscariot, one of the twelve disciples, went to the leading priests to arrange to betray Jesus to them. 11 The leading priests were delighted when they heard why he had come, and they promised him a reward. So he began looking for the right time and place to betray Jesus.