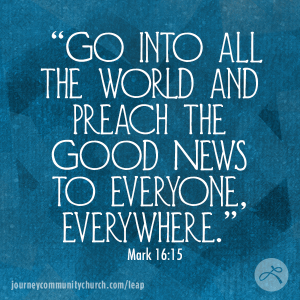 9 It was early on Sunday morning when Jesus rose from the dead, and the first person who saw him was Mary Magdalene, the woman from whom he had cast out seven demons. 10 She went and found the disciples, who were grieving and weeping. 11 But when she told them that Jesus was alive and she had seen him, they didn’t believe her.

12 Afterward he appeared to two who were walking from Jerusalem into the country, but they didn’t recognize him at first because he had changed his appearance. 13 When they realized who he was, they rushed back to tell the others, but no one believed them. 14 Still later he appeared to the eleven disciples as they were eating together. He rebuked them for their unbelief—their stubborn refusal to believe those who had seen him after he had risen. 15 And then he told them, “Go into all the world and preach the Good News to everyone, everywhere. 16 Anyone who believes and is baptized will be saved. But anyone who refuses to believe will be condemned. 17These signs will accompany those who believe: They will cast out demons in my name, and they will speak new languages. 18 They will be able to handle snakes with safety, and if they drink anything poisonous, it won’t hurt them. They will be able to place their hands on the sick and heal them.” 19 When the Lord Jesus had finished talking with them, he was taken up into heaven and sat down in the place of honor at God’s right hand. 20 And the disciples went everywhere and preached, and the Lord worked with them, confirming what they said by many miraculous signs.