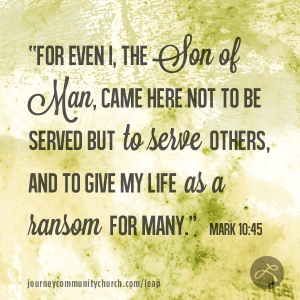 32 They were now on the way to Jerusalem, and Jesus was walking ahead of them. The disciples were filled with dread and the people following behind were overwhelmed with fear. Taking the twelve disciples aside, Jesus once more began to describe everything that was about to happen to him in Jerusalem. 33 “When we get to Jerusalem,” he told them, “the Son of Man will be betrayed to the leading priests and the teachers of religious law. They will sentence him to die and hand him over to the Romans. 34 They will mock him, spit on him, beat him with their whips, and kill him, but after three days he will rise again.” 35 Then James and John, the sons of Zebedee, came over and spoke to him. “Teacher,” they said, “we want you to do us a favor.” 36 “What is it?” he asked. 37 “In your glorious Kingdom, we want to sit in places of honor next to you,” they said, “one at your right and the other at your left.” 38 But Jesus answered, “You don’t know what you are asking! Are you able to drink from the bitter cup of sorrow I am about to drink? Are you able to be baptized with the baptism of suffering I must be baptized with?” 39 “Oh yes,” they said, “we are able!” And Jesus said, “You will indeed drink from my cup and be baptized with my baptism, 40 but I have no right to say who will sit on the thrones next to mine. God has prepared those places for the ones he has chosen.” 41 When the ten other disciples discovered what James and John had asked, they were indignant. 42 So Jesus called them together and said, “You know that in this world kings are tyrants, and officials lord it over the people beneath them. 43 But among you it should be quite different. Whoever wants to be a leader among you must be your servant, 44 and whoever wants to be first must be the slave of all. 45 For even I, the Son of Man, came here not to be served but to serve others, and to give my life as a ransom for many.” 46 And so they reached Jericho. Later, as Jesus and his disciples left town, a great crowd was following. A blind beggar named Bartimaeus (son of Timaeus) was sitting beside the road as Jesus was going by.
47 When Bartimaeus heard that Jesus from Nazareth was nearby, he began to shout out, “Jesus, Son of David, have mercy on me!” 48 “Be quiet!” some of the people yelled at him. But he only shouted louder, “Son of David, have mercy on me!” 49 When Jesus heard him, he stopped and said, “Tell him to come here.” So they called the blind man. “Cheer up,” they said. “Come on, he’s calling you!” 50 Bartimaeus threw aside his coat, jumped up, and came to Jesus. 51 “What do you want me to do for you?” Jesus asked. “Teacher,” the blind man said, “I want to see. “ 52 And Jesus said to him, “Go your way. Your faith has healed you.” And instantly the blind man could see! Then he followed Jesus down the road.