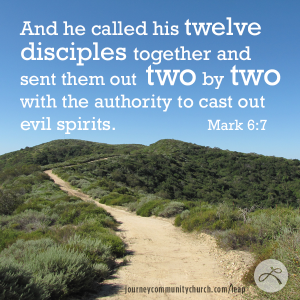 1 Jesus left that part of the country and returned with his disciples to Nazareth, his hometown. 2 The next Sabbath he began teaching in the synagogue, and many who heard him were astonished. They asked, “Where did he get all his wisdom and the power to perform such miracles? 3 He’s just the carpenter, the son of Mary and brother of James, Joseph, Judas, and Simon. And his sisters live right here among us.” They were deeply offended and refused to believe in him. 4 Then Jesus told them, “A prophet is honored everywhere except in his own hometown and among his relatives and his own family.” 5 And because of their unbelief, he couldn’t do any mighty miracles among them except to place his hands on a few sick people and heal them. 6 And he was amazed at their unbelief. Then Jesus went out from village to village, teaching. 7 And he called his twelve disciples together and sent them out two by two, with authority to cast out evil spirits. 8 He told them to take nothing with them except a walking stick—no food, no traveler’s bag, no money. 9 He told them to wear sandals but not to take even an extra coat. 10 “When you enter each village, be a guest in only one home,” he said. 11 “And if a village won’t welcome you or listen to you, shake off its dust from your feet as you leave. It is a sign that you have abandoned that village to its fate.” 12 So the disciples went out, telling all they met to turn from their sins. 13 And they cast out many demons and healed many sick people, anointing them with olive oil.