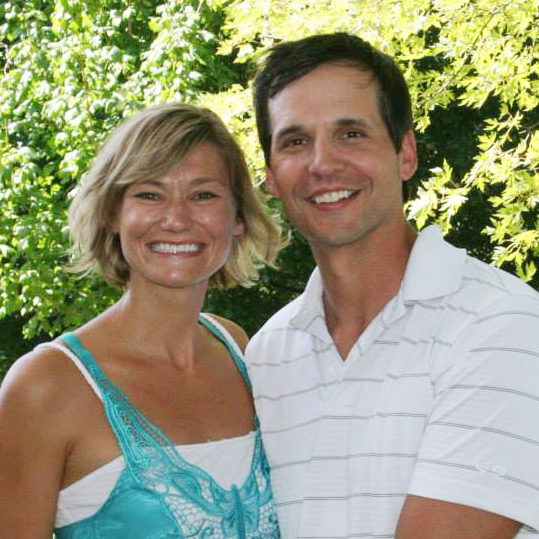 We are excited to introduce two new pastors who will lead and develop our College and Young Adult Ministry! Erik and Kristy Dees recently relocated from Iowa to join our team and are each bringing unique gifts and leadership experience to Journey. Erik is Pastor to Young Adults / Director of Leadership Development and Volunteer Engagement. Kristy is Pastor to College Students and College Age Adults.

Read more about them in their stories below.

I was born in Ojai, California but my parents eventually landed in Northern Colorado, where I was raised. I am the youngest of three boys. My mom made a serious commitment to Christ around the time I was born in Ojai. In time, my dad drifted from his faith and into alcohol and tensions grew in our home. My parents divorced when I was 13. The divorce was difficult for me and so I clung to bad friends and a “party lifestyle” to cope with the pain at home.

After high school, I landed a great job at a local Wal-Mart Logistics Facility. Eventually, Wal-Mart opened a new facility outside of Phoenix and I transferred there along with my live-in girlfriend. I did very well in my job and began to receive promotions and moved up into management positions. While this was happening, my personal life was unraveling with my girlfriend, who gave birth to our daughter, Lindsey, in 1994. I ended up moving out shortly after my daughter’s birth. I continued in my party lifestyle but visited my daughter when I could.

One night while sitting in a bar in Phoenix, I had a radical epiphany. I found myself incredibly lonely in the midst of my normal crowd and recognized the shallowness of my life. That night I decided that I would go to a church the next Sunday with my roommate. I attended Phoenix First Assembly and there encountered God for the first time. As soon as the music played, I was overwhelmed with the presence of God. I was severely convicted and could not come to down to the altar fast enough to give my heart to Him. That spring of 1995, I experienced the grace and forgiveness of God. I have never been the same.

As a new Christian, I decided that I needed to become a real father to my now one-year- old daughter. I asked God to let me raise my daughter because her mother was continuing to participate in the drug and party lifestyle. Through a miraculous story (for another time), I ended up with full custody of my daughter, without any legal action needed. God allowed me to raise her and also began to give me opportunities to serve in my local church.

My career eventually landed me at Wal-Mart’s corporate offices in AR in late 2002. I loved my corporate job and expected to continue at Wal-Mart for a 20-year career, followed by establishing my own training/consulting business. I was always very active in the church as a volunteer leader, but never planned to work in the church.

Through yet another miraculous God story, I found my wife in 2007 and we married in 2008. In late 2007, I became increasingly unsettled with my life’s plan and began to pray again about my future direction. Through some God conversations, I began to sense a possible call to ministry. Doors began to open for me and I took on more and more responsibility as a teacher in our local church. I started online classes to pursue a ministry degree and my father-in-law asked me to consider leaving Wal-Mart to serve in full-time ministry alongside him, as he was feeling called back to his previous church in Iowa.

I accepted that call and have been in ministry in Iowa since 2009. I completed my B.A. in Bible and Theology and am currently attending Bethel Seminary for my M.A. in Transformational Leadership, with plans to then complete a D.Min in Christian Leadership practice.

I was born in Duluth, MN. I grew up with two brothers and my memories of early childhood are happy and filled with family activities and sports. We lived all over the Midwest, due to my father’s jobs in full-time ministry and education. I gave my heart to Jesus at around six years old and was the “model” church child growing up, complete with Bible quiz trophies and OCD need to please my parents and all my fishbowl watchers. I vividly remember standing on my porch deck in the middle of the night at age 16, asking God if this was it, if this was what it meant to be a Christian, and recognizing that what was real to my parents was only hitting surface level with me, despite my best efforts.

I went to ORU in Tulsa to study psychology, as they offered me the most scholarships and my older brother was also attending there.  At this point, I decided that I was going to be an atheist.  I have always had a high need for authenticity and my faith did not feel authentic so I scrapped it.  I told God that if He was real; He would need to prove it to me. I kept a folder with any evidence or experiences for/against the reality of God.  After it became overwhelmingly apparent to me that there must be a God, I then focused on exploring all sorts of religions and types of gods, not wanting to believe in Jesus because that is the God my parents chose. Out of all the gods I tried to search for, Jesus was the only one who showed up.  At that point, I began to experience the presence of God in a way that changed the deepest parts of me.  I was 100% in.

Ministry from that point on was really all I wanted to do, although I don’t know that I recognized it as my “calling” until much later.  I started going on short term trips all over the world through my school and church: Guyana, Mexico, Australia, Spain, Greece, Italy, Guatemala etc. There I found God placing in my heart His strong compassion for the suffering, vulnerable, and wounded.  I worked as a community outreach coordinator at ORU, recruiting and organizing collegiates to mobilize for city outreach, including leading homeless ministries, tutoring for at-risk students, children’s hospital visitation, retirement home lunch ministry and neighborhood park outreaches.

I then moved to California and began working at a group home for teenage girls who were sexually abused by family members. I started working at Journey and kept both jobs throughout my next couple years in CA. God then opened doors for me to pursue full-time missions through Africa Inland Mission.  I accepted a permanent position in Angola, which would focus on teaching in orphanages recently established after the civil war and youth leadership training. I moved to Brazil to learn Portuguese and then lived in Kuito, Angola for about two years. While in Angola, I taught at both the city and church orphanages, developed leadership camps and events for Angolan youth, started a VBS for street kids in Kuito, and developed and provided training for the teachers at the orphanage to learn and use templates to teach Bible lessons.

This is getting really long (sorry, long life), so I will skip the story of how I was road blocked from returning to Angola after my two year visa expired. I was struggling with depression during this time, both from what seemed like the loss of my calling and the loss of my brother, who was killed in a car accident along with his wife. God brought along my husband and step-daughter about this time and Erik and I were married in 2008. I was working as the community outreach coordinator for Youth Bridge, which was the non-profit who ran all of the youth shelters and behavioral services for NW Arkansas.

Then, we moved to Iowa as Erik accepted the youth pastor position at Faith Assembly.  I worked as a case manager with families experiencing abuse, establishing goals with them and providing supportive services. Most of my 5 years in Iowa I was working for the state of Iowa, including facilitation and creation of their employment readiness classes and a year as a child abuse social worker. Last year, I finished licensing classes through our denomination and am currently credentialed as a minister with the Assemblies of God. I will complete my M.A. in Education/School Counseling through Buena Vista University around Dec. 2015.

And now, I am super excited about a new season of life and ministry at Journey! That’s me!