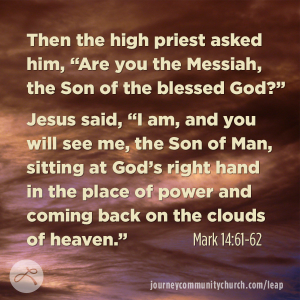 53 Jesus was led to the high priest’s home where the leading priests, other leaders, and teachers of religious law had gathered. 54 Meanwhile, Peter followed far behind and then slipped inside the gates of the high priest’s courtyard. For a while he sat with the guards, warming himself by the fire. 55 Inside, the leading priests and the entire high council were trying to find witnesses who would testify against Jesus, so they could put him to death. But their efforts were in vain. 56 Many false witnesses spoke against him, but they contradicted each other. 57 Finally, some men stood up to testify against him with this lie: 58 “We heard him say, ‘I will destroy this Temple made with human hands, and in three days I will build another, made without human hands.’” 59 But even then they didn’t get their stories straight! 60  Then the high priest stood up before the others and asked Jesus, “Well, aren’t you going to answer these charges? What do you have to say for yourself?” 61 Jesus made no reply. Then the high priest asked him, “Are you the Messiah, the Son of the blessed God?” 62 Jesus said, “I am, and you will see me, the Son of Man, sitting at God’s right hand in the place of power and coming back on the clouds of heaven.” 63 Then the high priest tore his clothing to show his horror and said, “Why do we need other witnesses? 64 You have all heard his blasphemy. What is your verdict?” And they all condemned him to death. 65 Then some of them began to spit at him, and they blindfolded him and hit his face with their fists. “Who hit you that time, you prophet?” they jeered. And even the guards were hitting him as they led him away. 66 Meanwhile, Peter was below in the courtyard. One of the servant girls who worked for the high priest 67 noticed Peter warming himself at the fire. She looked at him closely and then said, “You were one of those with Jesus, the Nazarene.” 68 Peter denied it. “I don’t know what you’re talking about,” he said, and he went out into the entryway. Just then, a rooster crowed 69 The servant girl saw him standing there and began telling the others, “That man is definitely one of them!” 70 Peter denied it again. A little later some other bystanders began saying to Peter, “You must be one of them because you are from Galilee.” 71 Peter said, “I swear by God, I don’t know this man you’re talking about.” 72 And immediately the rooster crowed the second time. Suddenly, Jesus’ words flashed through Peter’s mind: “Before the rooster crows twice, you will deny me three times.” And he broke down and cried.