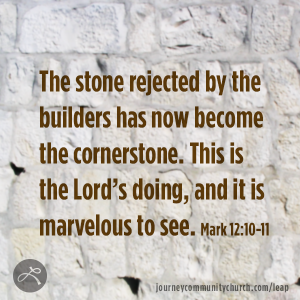 27 By this time they had arrived in Jerusalem again. As Jesus was walking through the Temple area, the leading priests, the teachers of religious law, and the other leaders came up to him. They demanded, 28 “By whose authority did you drive out the merchants from the Temple? Who gave you such authority?” 29 “I’ll tell who gave me authority to do these things if you answer one question,” Jesus replied. 30 “Did John’s baptism come from heaven or was it merely human? Answer me!” 31 They talked it over among themselves. “If we say it was from heaven, he will ask why we didn’t believe him. 32 But do we dare say it was merely human?” For they were afraid that the people would start a riot, since everyone thought that John was a prophet. 33 So they finally replied, “We don’t know.” And Jesus responded, “Then I won’t answer your question either.” 12:1 Then Jesus began telling them stories: “A man planted a vineyard, built a wall around it, dug a pit for pressing out the grape juice, and built a lookout tower. Then he leased the vineyard to tenant farmers and moved to another country. 2 At grape-picking time he sent one of his servants to collect his share of the crop. 3 But the farmers grabbed the servant, beat him up, and sent him back empty-handed. 4 “The owner then sent another servant, but they beat him over the head and treated him shamefully. 5 The next servant he sent was killed. Others who were sent were either beaten or killed, 6 until there was only one left—his son whom he loved dearly. The owner finally sent him, thinking, ‘Surely they will respect my son.’ 7 “But the farmers said to one another, ‘Here comes the heir to this estate. Let’s kill him and get the estate for ourselves!’ 8 So they grabbed him and murdered him and threw his body out of the vineyard. 9 “What do you suppose the owner of the vineyard will do?” Jesus asked. “I’ll tell you—he will come and kill them all and lease the vineyard to others. 10 Didn’t you ever read this in the Scriptures?

‘The stone rejected by the builders

has now become the cornerstone.

and it is marvelous to see.’ ”

12 The Jewish leaders wanted to arrest him for using this illustration because they realized he was pointing at them—they were the wicked farmers in his story. But they were afraid to touch him because of the crowds. So they left him and went away.