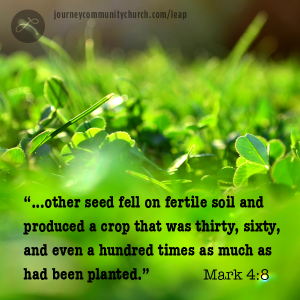 1 Once again Jesus began teaching by the lakeshore. There was such a large crowd along the shore that he got into a boat and sat down and spoke from there. 2 He began to teach the people by telling many stories such as this one:

3 “Listen! A farmer went out to plant some seed. 4 As he scattered it across his field, some seed fell on a footpath, and the birds came and ate it. 5 Other seed fell on shallow soil with underlying rock. The plant sprang up quickly, 6 but it soon wilted beneath the hot sun and died because the roots had no nourishment in the shallow soil. 7 Other seed fell among thorns that shot up and choked out the tender blades so that it produced no grain. 8 Still other seed fell on fertile soil and produced a crop that was thirty, sixty, and even a hundred times as much as had been planted.” Then he said, 9 “Anyone who is willing to hear should listen and understand!” 10 Later, when Jesus was alone with the twelve disciples and with the others who were gathered around, they asked him, “What do your stories mean?” 11 He replied, “You are permitted to understand the secret about the Kingdom of God. But I am using these stories to conceal everything about it from outsiders, 12 so that the Scriptures might be fulfilled:

‘They see what I do,

but they don’t perceive its meaning.

They hear my words,

but they don’t understand.

So they will not turn from their sins

13 “But if you can’t understand this story, how will you understand all the others I am going to tell? 14 The farmer I talked about is the one who brings God’s message to others. 15 The seed that fell on the hard path represents those who hear the message, but then Satan comes at once and takes it away from them. 16 The rocky soil represents those who hear the message and receive it with joy. 17 But like young plants in such soil, their roots don’t go very deep. At first they get along fine, but they wilt as soon as they have problems or are persecuted because they believe the word. 18 The thorny ground represents those who hear and accept the Good News, 19 but all too quickly the message is crowded out by the cares of this life, the lure of wealth, and the desire for nice things, so no crop is produced. 20 But the good soil represents those who hear and accept God’s message and produce a huge harvest—thirty, sixty, or even a hundred times as much as had been planted.” 21 Then Jesus asked them, “Would anyone light a lamp and then put it under a basket or under a bed to shut out the light? Of course not! A lamp is placed on a stand, where its light will shine. 22 Everything that is now hidden or secret will eventually be brought to light. 23 Anyone who is willing to hear should listen and understand! 24 And be sure to pay attention to what you hear. The more you do this, the more you will understand—and even more, besides. 25 To those who are open to my teaching, more understanding will be given. But to those who are not listening, even what they have will be taken away from them.”