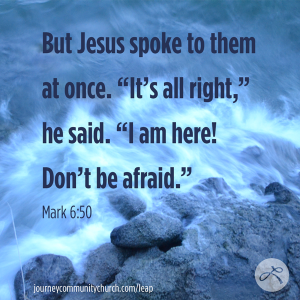 45 Immediately after this, Jesus made his disciples get back into the boat and head out across the lake to Bethsaida, while he sent the people home. 46 Afterward he went up into the hills by himself to pray. 47 During the night, the disciples were in their boat out in the middle of the lake, and Jesus was alone on land. 48 He saw that they were in serious trouble, rowing hard and struggling against the wind and waves. About three o’clock in the morning he came to them, walking on the water. He started to go past them, 49 but when they saw him walking on the water, they screamed in terror, thinking he was a ghost. 50 They were all terrified when they saw him. But Jesus spoke to them at once. “It’s all right,” he said. “I am here! Don’t be afraid.” 51 Then he climbed into the boat, and the wind stopped. They were astonished at what they saw. 52 They still didn’t understand the significance of the miracle of the multiplied loaves, for their hearts were hard and they did not believe. 53 When they arrived at Gennesaret on the other side of the lake, they anchored the boat 54 and climbed out. The people standing there recognized him at once, 55 and they ran throughout the whole area and began carrying sick people to him on mats. 56 Wherever he went—in villages and cities and out on the farms—they laid the sick in the market plazas and streets. The sick begged him to let them at least touch the fringe of his robe, and all who touched it were healed.