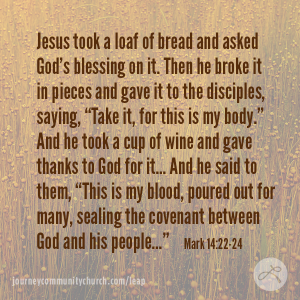 12 On the first day of the Festival of Unleavened Bread (the day the Passover lambs were sacrificed), Jesus’ disciples asked him, “Where do you want us to go to prepare the Passover supper?” 13 So Jesus sent two of them into Jerusalem to make the arrangements. “As you go into the city,” he told them, “a man carrying a pitcher of water will meet you. Follow him. 14 At the house he enters, say to the owner, ‘The Teacher asks, Where is the guest room where I can eat the Passover meal with my disciples?’ 15 He will take you upstairs to a large room that is already set up. That is the place; go ahead and prepare our supper there.” 16 So the two disciples went on ahead into the city and found everything just as Jesus had said, and they prepared the Passover supper there. 17 In the evening Jesus arrived with the twelve disciples. 18 As they were sitting around the table eating, Jesus said, “The truth is, one of you will betray me, one of you who is here eating with me.” 19 Greatly distressed, one by one they began to ask him, “I’m not the one, am I?” 20 He replied, “It is one of you twelve, one who is eating with me now. 21 For I, the Son of Man, must die, as the Scriptures declared long ago. But how terrible it will be for my betrayer. Far better for him if he had never been born!” 22 As they were eating, Jesus took a loaf of bread and asked God’s blessing on it. Then he broke it in pieces and gave it to the disciples, saying, “Take it, for this is my body.” 23 And he took a cup of wine and gave thanks to God for it. He gave it to them, and they all drank from it. 24 And he said to them, “This is my blood, poured out for many, sealing the covenant between God and his people. 25 I solemnly declare that I will not drink wine again until that day when I drink it new in the Kingdom of God.” 26 Then they sang a hymn and went out to the Mount of Olives. 27 “All of you will desert me,” Jesus told them. “For the Scriptures say,

‘God will strike the Shepherd,

and the sheep will be scattered.’

28 But after I am raised from the dead, I will go ahead of you to Galilee and meet you there.” 29 Peter said to him, “Even if everyone else deserts you, I never will.” 30 “Peter,” Jesus replied, “the truth is, this very night, before the rooster crows twice, you will deny me three times.” 31 “No!” Peter insisted. “Not even if I have to die with you! I will never deny you!” And all the others vowed the same.