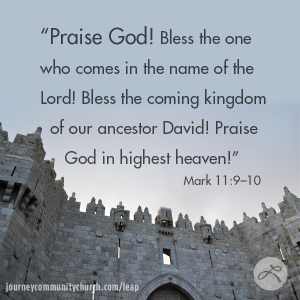 1 As Jesus and his disciples approached Jerusalem, they came to the towns of Bethphage and Bethany, on the Mount of Olives. Jesus sent two of them on ahead. 2 “Go into that village over there,” he told them, “and as soon as you enter it, you will see a colt tied there that has never been ridden. Untie it and bring it here. 3 If anyone asks what you are doing, just say, ‘The Lord needs it and will return it soon.’ ” 4 The two disciples left and found the colt standing in the street, tied outside a house. 5 As they were untying it, some bystanders demanded, “What are you doing, untying that colt?” 6 They said what Jesus had told them to say, and they were permitted to take it. 7 Then they brought the colt to Jesus and threw their garments over it, and he sat on it. 8 Many in the crowd spread their coats on the road ahead of Jesus, and others cut leafy branches in the fields and spread them along the way. 9 He was in the center of the procession, and the crowds all around him were shouting,

“Praise God!
Bless the one who comes in the name of the Lord!
10    Bless the coming kingdom of our ancestor David!
Praise God in highest heaven!”

11 So Jesus came to Jerusalem and went into the Temple. He looked around carefully at everything, and then he left because it was late in the afternoon. Then he went out to Bethany with the twelve disciples.