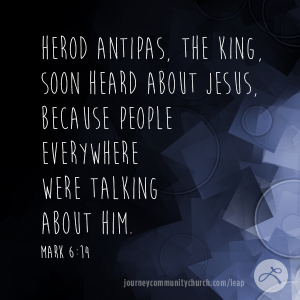 14 Herod Antipas, the king, soon heard about Jesus, because people everywhere were talking about him. Some were saying, “This must be John the Baptist come back to life again. That is why he can do such miracles.” 15 Others thought Jesus was the ancient prophet Elijah. Still others thought he was a prophet like the other great prophets of the past. 16 When Herod heard about Jesus, he said, “John, the man I beheaded, has come back from the dead.” 17 For Herod had sent soldiers to arrest and imprison John as a favor to Herodias. She had been his brother Philip’s wife, but Herod had married her. 18 John kept telling Herod, “It is illegal for you to marry your brother’s wife.” 19 Herodias was enraged and wanted John killed in revenge, but without Herod’s approval she was powerless. 20 And Herod respected John, knowing that he was a good and holy man, so he kept him under his protection. Herod was disturbed whenever he talked with John, but even so, he liked to listen to him. 21 Herodias’s chance finally came. It was Herod’s birthday, and he gave a party for his palace aides, army officers, and the leading citizens of Galilee. 22 Then his daughter, also named Herodias, came in and performed a dance that greatly pleased them all. “Ask me for anything you like,” the king said to the girl, “and I will give it to you.” 23 Then he promised, “I will give you whatever you ask, up to half of my kingdom!” 24 She went out and asked her mother, “What should I ask for?” Her mother told her, “Ask for John the Baptist’s head!”25 So the girl hurried back to the king and told him, “I want the head of John the Baptist, right now, on a tray!” 26 Then the king was very sorry, but he was embarrassed to break his oath in front of his guests. 27 So he sent an executioner to the prison to cut off John’s head and bring it to him. The soldier beheaded John in the prison,
28 brought his head on a tray, and gave it to the girl, who took it to her mother. 29 When John’s disciples heard what had happened, they came for his body and buried it in a tomb.