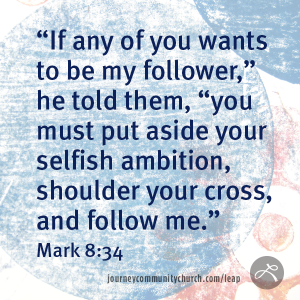 27 Jesus and his disciples left Galilee and went up to the villages of Caesarea Philippi. As they were walking along, he asked them, “Who do people say I am?” 28 “Well,” they replied, “some say John the Baptist, some say Elijah, and others say you are one of the other prophets.” 29 Then Jesus asked, “Who do you say I am?” Peter replied, “You are the Messiah.” 30 But Jesus warned them not to tell anyone about him. 31 Then Jesus began to tell them that he, the Son of Man, would suffer many terrible things and be rejected by the leaders, the leading priests, and the teachers of religious law. He would be killed, and three days later he would rise again. 32 As he talked about this openly with his disciples, Peter took him aside and told him he shouldn’t say things like that. 33 Jesus turned and looked at his disciples and then said to Peter very sternly, “Get away from me, Satan! You are seeing things merely from a human point of view, not from God’s.” 34 Then he called his disciples and the crowds to come over and listen. “If any of you wants to be my follower,” he told them, “you must put aside your selfish ambition, shoulder your cross, and follow me. 35 If you try to keep your life for yourself, you will lose it. But if you give up your life for my sake and for the sake of the Good News, you will find true life. 36 And how do you benefit if you gain the whole world but lose your own soul in the process? 37 Is anything worth more than your soul? 38 If a person is ashamed of me and my message in these adulterous and sinful days, I, the Son of Man, will be ashamed of that person when I return in the glory of my Father with the holy angels.” 9:1 Jesus went on to say, “I assure you that some of you standing here right now will not die before you see the Kingdom of God arrive in great power!”