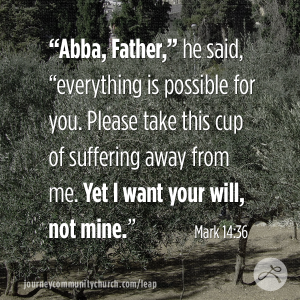 32 And they came to an olive grove called Gethsemane, and Jesus said, “Sit here while I go and pray.” 33 He took Peter, James, and John with him, and he began to be filled with horror and deep distress. 34 He told them, “My soul is crushed with grief to the point of death. Stay here and watch with me.” 35 He went on a little farther and fell face down on the ground. He prayed that, if it were possible, the awful hour awaiting him might pass him by. 36 “Abba, Father,” he said, “everything is possible for you. Please take this cup of suffering away from me. Yet I want your will, not mine.” 37 Then he returned and found the disciples asleep. “Simon!” he said to Peter. “Are you asleep? Couldn’t you stay awake and watch with me even one hour? 38 Keep alert and pray. Otherwise temptation will overpower you. For though the spirit is willing enough, the body is weak.” 39 Then Jesus left them again and prayed, repeating his pleadings. 40 Again he returned to them and found them sleeping, for they just couldn’t keep their eyes open. And they didn’t know what to say. 41 When he returned to them the third time, he said, “Still sleeping? Still resting? Enough! The time has come. I, the Son of Man, am betrayed into the hands of sinners. 42 Up, let’s be going. See, my betrayer is here!” 43 And immediately, as he said this, Judas, one of the twelve disciples, arrived with a mob that was armed with swords and clubs. They had been sent out by the leading priests, the teachers of religious law, and the other leaders.  44 Judas had given them a prearranged signal: “You will know which one to arrest when I go over and give him the kiss of greeting. Then you can take him away under guard.” 45 As soon as they arrived, Judas walked up to Jesus. “Teacher!” he exclaimed, and gave him the kiss. 46 Then the others grabbed Jesus and arrested him. 47 But someone pulled out a sword and slashed off an ear of the high priest’s servant. 48 Jesus asked them, “Am I some dangerous criminal, that you come armed with swords and clubs to arrest me? 49 Why didn’t you arrest me in the Temple? I was there teaching every day. But these things are happening to fulfill what the Scriptures say about me.” 50 Meanwhile, all his disciples deserted him and ran away. 51 There was a young man following along behind, clothed only in a linen nightshirt. When the mob tried to grab him, 52 they tore off his clothes, but he escaped and ran away naked.