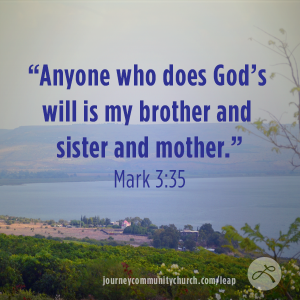 20 When Jesus returned to the house where he was staying, the crowds began to gather again, and soon he and his disciples couldn’t even find time to eat. 21 When his family heard what was happening, they tried to take him home with them. “He’s out of his mind,” they said. 22 But the teachers of religious law who had arrived from Jerusalem said, “He’s possessed by Satan, the prince of demons. That’s where he gets the power to cast out demons.” 23 Jesus called them over and said to them by way of illustration, “How can Satan cast out Satan? 24 A kingdom at war with itself will collapse. 25 A home divided against itself is doomed. 26 And if Satan is fighting against himself, how can he stand? He would never survive. 27 Let me illustrate this. You can’t enter a strong man’s house and rob him without first tying him up. Only then can his house be robbed! 28 I assure you that any sin can be forgiven, including blasphemy; 29 but anyone who blasphemes against the Holy Spirit will never be forgiven. It is an eternal sin.” 30 He told them this because they were saying he had an evil spirit. 31 Jesus’ mother and brothers arrived at the house where he was teaching. They stood outside and sent word for him to come out and talk with them. 32 There was a crowd around Jesus, and someone said, “Your mother and your brothers and sisters are outside, asking for you.”

33 Jesus replied, “Who is my mother? Who are my brothers?” 34 Then he looked at those around him and said, “These are my mother and brothers. 35 Anyone who does God’s will is my brother and sister and mother.”