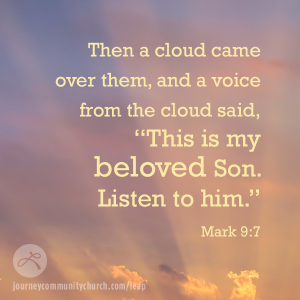 2 Six days later Jesus took Peter, James, and John to the top of a mountain. No one else was there. As the men watched, Jesus’ appearance changed, 3 and his clothing became dazzling white, far whiter than any earthly process could ever make it. 4 Then Elijah and Moses appeared and began talking with Jesus. 5 “Teacher, this is wonderful!” Peter exclaimed. “We will make three shrines—one for you, one for Moses, and one for Elijah.” 6 He didn’t really know what to say, for they were all terribly afraid. 7 Then a cloud came over them, and a voice from the cloud said, “This is my beloved Son. Listen to him.” 8 Suddenly they looked around, and Moses and Elijah were gone, and only Jesus was with them. 9 As they descended the mountainside, he told them not to tell anyone what they had seen until he, the Son of Man, had risen from the dead. 10 So they kept it to themselves, but they often asked each other what he meant by “rising from the dead.” 11 Now they began asking him, “Why do the teachers of religious law insist that Elijah must return before the Messiah comes?” 12 Jesus responded, “Elijah is indeed coming first to set everything in order. Why then is it written in the Scriptures that the Son of Man must suffer and be treated with utter contempt? 13 But I tell you, Elijah has already come, and he was badly mistreated, just as the Scriptures predicted.”