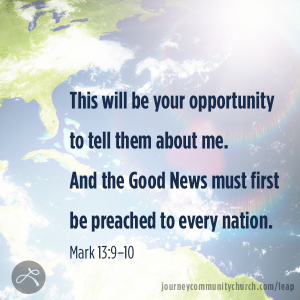 1 As Jesus was leaving the Temple that day, one of his disciples said, “Teacher, look at these tremendous buildings! Look at the massive stones in the walls!” 2 Jesus replied, “These magnificent buildings will be so completely demolished that not one stone will be left on top of another.” 3 Later, Jesus sat on the slopes of the Mount of Olives across the valley from the Temple. Peter, James, John, and Andrew came to him privately and asked him, 4 “When will all this take place? And will there be any sign ahead of time to show us when all this will be fulfilled?” 5 Jesus replied, “Don’t let anyone mislead you, 6 because many will come in my name, claiming to be the Messiah. They will lead many astray. 7 And wars will break out near and far, but don’t panic. Yes, these things must come, but the end won’t follow immediately. 8 Nations and kingdoms will proclaim war against each other, and there will be earthquakes in many parts of the world, and famines. But all this will be only the beginning of the horrors to come. 9 But when these things begin to happen, watch out! You will be handed over to the courts and beaten in the synagogues. You will be accused before governors and kings of being my followers. This will be your opportunity to tell them about me. 10 And the Good News must first be preached to every nation. 11 But when you are arrested and stand trial, don’t worry about what to say in your defense. Just say what God tells you to. Then it is not you who will be speaking, but the Holy Spirit. 12 “Brother will betray brother to death, fathers will betray their own children, and children will rise against their parents and cause them to be killed. 13 And everyone will hate you because of your allegiance to me. But those who endure to the end will be saved. 14 The time will come when you will see the sacrilegious object that causes desecration standing where it should not be”—reader, pay attention! “Then those in Judea must flee to the hills. 15 A person outside the house must not go back into the house to pack. 16 A person in the field must not return even to get a coat. 17 How terrible it will be for pregnant women and for mothers nursing their babies in those days. 18 And pray that your flight will not be in winter. 19 For those will be days of greater horror than at any time since God created the world. And it will never happen again. 20 In fact, unless the Lord shortens that time of calamity, the entire human race will be destroyed. But for the sake of his chosen ones he has shortened those days. 21 And then if anyone tells you, ‘Look, here is the Messiah,’ or, ‘There he is,’ don’t pay any attention. 22 For false messiahs and false prophets will rise up and perform miraculous signs and wonders so as to deceive, if possible, even God’s chosen ones.

23 Watch out! I have warned you!
24 “At that time, after those horrible days end,
the sun will be darkened,
the moon will not give light,
25    the stars will fall from the sky,
and the powers of heaven will be shaken.

26 Then everyone will see the Son of Man arrive on the clouds with great power and glory. 27 And he will send forth his angels to gather together his chosen ones from all over the world—from the farthest ends of the earth and heaven.
28 Now, learn a lesson from the fig tree. When its buds become tender and its leaves begin to sprout, you know without being told that summer is near. 29 Just so, when you see the events I’ve described beginning to happen, you can be sure that his return is very near, right at the door. 30 I assure you, this generation will not pass from the scene until all these events have taken place. 31 Heaven and earth will disappear, but my words will remain forever. 32 However, no one knows the day or hour when these things will happen, not even the angels in heaven or the Son himself. Only the Father knows. 33 And since you don’t know when they will happen, stay alert and keep watch. 34 The coming of the Son of Man can be compared with that of a man who left home to go on a trip. He gave each of his employees instructions about the work they were to do, and he told the gatekeeper to watch for his return. 35 So keep a sharp lookout! For you do not know when the homeowner will return—at evening, midnight, early dawn, or late daybreak. 36 Don’t let him find you sleeping when he arrives without warning. 37 What I say to you I say to everyone: Watch for his return!”
Author’s interpretation

This passage is significantly different in style and content to what we have encountered so far in Mark. Here, Jesus takes on the role of prophet, and he speaks the language of a prophet, making references to Old Testament prophecies and using the colorful, dense imagery that is characteristic of Hebrew prophets, especially in prophecies about cataclysmic events. In order to more clearly unpack what Jesus might be saying, rather than taking it one intriguing phrase at a time, as we have in the rest of the story, I am going to interpret the passage as a whole.

Jesus’ prophecy is precipitated by the disciples commenting on the beautiful buildings and massive stones. Indeed, the temple in Jerusalem was an astounding place built by Herod the Great—grandfather of the Herod who killed John—who was the king of Judea at the time of Jesus’ birth. He was a non-Jew who had usurped the Jewish throne by forcibly marrying into the Jewish royal family and then assassinating all of his in-laws. In an unsuccessful attempt to make himself popular, he undertook a massive renovation project on the temple which was still not quite complete by the time of this passage. Although Herod never gained the people’s love, he did manage to build a marvelously impressive temple, of which even Herod’s enemies were proud.

While the disciples notice the architectural wonder of the temple, Jesus focuses on its spiritual bankruptcy. Despite how impressive it appears, it is full of corruption, thievery, deception, and hypocrisy. Because of this spiritual bankruptcy, he has already predicted several times in the past several passages that the temple will not be allowed to stand for long:

Apparently, the disciples have not picked up on Jesus’ hints about the future of the temple; so he says here in plain language, ‘Not one stone will be left on another.’  The disciples are astonished. They can’t imagine that something so beautiful, and so strong, that’s taken so long to build could be destroyed. They ask Jesus when and how such a thing could happen. In verse 30, Jesus answers them: it will happen before their generation dies out. In fact, the temple was destroyed by the Romans in AD 70, less than 40 years later. Several of the disciples were alive to see it, and Mark is probably writing during the war that leads up to the temple’s destruction. Mark is watching this prophecy come true as he writes; thus the inserted warning, ‘reader, pay attention!’

Besides wanting to know when it will happen, they want to know the sign that it is about to happen. They expect that some cataclysm will have to occur in order for the temple to be destroyed, and they want to be able to get out of the way. Jesus starts by discounting anything that they could possibly construe as a sign: not his return, not war, not earthquake, and not famine. They will see some of these things soon (and they will see people claiming to he him), but they aren’t the sign that the temple will be destroyed. The temple may be safe during this time, but the disciples are not: they are going to face all sorts of persecution. Jesus doesn’t want them to be surprised, and he wants them to know that the Holy Spirit will be with them.

The ‘sacrilegious object’ (v. 14) is the sign that the temple will be destroyed. Jesus is quoting Daniel 9:27 here, and the sacrilegious object is some sort of blasphemy to the temple, perhaps referring to a Roman desecration of the temple and perhaps referring to a usurping high priest appointed around the time Mark is writing. We know this sacrilege is the sign, because while he has been saying ‘don’t panic,’ after the sacrilege, Jesus says, ‘Run!’ We know he is still talking about the destruction of the temple because the events, though terrible, are local: only those in Judea need run, and if they run to the hills they will be safe.

What follows is a highly figurative, spiritual perspective on the destruction of the temple. The passages about the sky falling are quotes from the prophet Isaiah (13:10 and 34:4). Stars, sun, and moon are frequent prophetic images for earthly rulers and the spiritual power behind them. In this case, they refer to the priests and the Jewish council: when the temple is destroyed, their power will be destroyed. The Son of Man arriving on the clouds is a quotation from the prophet Daniel (7: 13-14), and it refers to the Son of Man ascending, not returning. He is coming before the Father to receive authority and dominion. Jesus said in Monday’s passage that ‘the stone rejected by the builders has now become the cornerstone’ (Psalm 110). Once the temple is destroyed, a new temple will be built on a new cornerstone—that is on him, who was rejected by the priests. In other words, as the temple is crashing down, both physically and spiritually, Jesus’ church will be rising up. And the news is good news, not bad, because in this new era all the nations who were neglected by the temple leaders will be included.

In this prophecy, Jesus is giving the disciples something strong to hold on to in the tough times that will follow his death and resurrection. When the disciples live through all of these events and see Jesus’ words come true, they will indeed know that they are trustworthy. Jesus’ words will prove to be far stronger than the massive stones of the temple. This demonstration will give them the assurance they need to remain faithful employees, doing his bidding and looking for him, until he comes again.