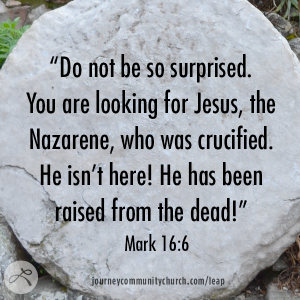 Mark 16:1–8—The resurrection of Jesus

1 The next evening, when the Sabbath ended, Mary Magdalene and Salome and Mary the mother of James went out and purchased burial spices to put on Jesus’ body. 2 Very early on Sunday morning, just at sunrise, they came to the tomb. 3 On the way they were discussing who would roll the stone away from the entrance to the tomb. 4 But when they arrived, they looked up and saw that the stone—a very large one—had already been rolled aside. 5 So they entered the tomb, and there on the right sat a young man clothed in a white robe. The women were startled, 6 but the angel said, “Do not be so surprised. You are looking for Jesus, the Nazarene, who was crucified. He isn’t here! He has been raised from the dead! Look, this is where they laid his body. 7 Now go and give this message to his disciples, including Peter: Jesus is going ahead of you to Galilee. You will see him there, just as he told you before he died!” 8 The women fled from the tomb, trembling and bewildered, saying nothing to anyone because they were too frightened to talk.