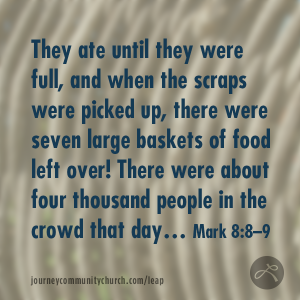 1 About this time another great crowd had gathered, and the people ran out of food again. Jesus called his disciples and told them, 2 “I feel sorry for these people. They have been here with me for three days, and they have nothing left to eat. 3 And if I send them home without feeding them, they will faint along the road. For some of them have come a long distance.” 4 “How are we supposed to find enough food for them here in the wilderness?” his disciples asked. 5 “How many loaves of bread do you have?” he asked. “Seven,” they replied. 6 So Jesus told all the people to sit down on the ground. Then he took the seven loaves, thanked God for them, broke them into pieces, and gave them to his disciples, who distributed the bread to the crowd. 7 A few small fish were found, too, so Jesus also blessed these and told the disciples to pass them out. 8 They ate until they were full, and when the scraps were picked up, there were seven large baskets of food left over! 9 There were about four thousand people in the crowd that day, and he sent them home after they had eaten. 10 Immediately after this, he got into a boat with his disciples and crossed over to the region of Dalmanutha.