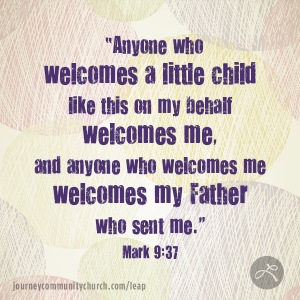 30 Leaving that region, they traveled through Galilee. Jesus tried to avoid all publicity 31 in order to spend more time with his disciples and teach them. He said to them, “The Son of Man is going to be betrayed. He will be killed, but three days later he will rise from the dead.” 32 But they didn’t understand what he was saying, and they were afraid to ask him what he meant. 33 After they arrived at Capernaum, Jesus and his disciples settled in the house where they would be staying. Jesus asked them, “What were you discussing out on the road?” 34 But they didn’t answer, because they had been arguing about which of them was the greatest. 35 He sat down and called the twelve disciples over to him. Then he said, “Anyone who wants to be the first must take last place and be the servant of everyone else.” 36 Then he put a little child among them. Taking the child in his arms, he said to them, 37 “Anyone who welcomes a little child like this on my behalf welcomes me, and anyone who welcomes me welcomes my Father who sent me.” 38 John said to Jesus, “Teacher, we saw a man using your name to cast out demons, but we told him to stop because he isn’t one of our group.” 39 “Don’t stop him!” Jesus said. “No one who performs miracles in my name will soon be able to speak evil of me. 40 Anyone who is not against us is for us. 41 If anyone gives you even a cup of water because you belong to the Messiah, I assure you, that person will be rewarded. 42 “But if anyone causes one of these little ones who trusts in me to lose faith, it would be better for that person to be thrown into the sea with a large millstone tied around the neck. 43 If your hand causes you to sin, cut it off. It is better to enter heaven with only one hand than to go into the unquenchable fires of hell with two hands. 45 If your foot causes you to sin, cut it off. It is better to enter heaven with only one foot than to be thrown into hell with two feet. 47 And if your eye causes you to sin, gouge it out. It is better to enter the Kingdom of God half blind than to have two eyes and be thrown into hell, 48 ‘where the worm never dies and the fire never goes out.’ 49 “For everyone will be purified with fire. 50 Salt is good for seasoning. But if it loses its flavor, how do you make it salty again? You must have the qualities of salt among yourselves and live in peace with each other.”