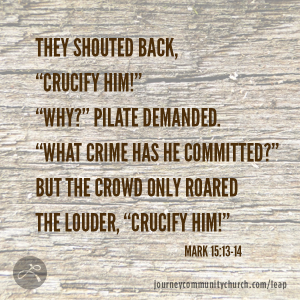 1 Very early in the morning the leading priests, other leaders, and teachers of religious law—the entire high council—met to discuss their next step. They bound Jesus and took him to Pilate, the Roman governor. 2 Pilate asked Jesus, “Are you the King of the Jews?” Jesus replied, “Yes, it is as you say.” 3 Then the leading priests accused him of many crimes, 4 and Pilate asked him, “Aren’t you going to say something? What about all these charges against you?” 5 But Jesus said nothing, much to Pilate’s surprise. 6 Now it was the governor’s custom to release one prisoner each year at Passover time—anyone the people requested. 7 One of the prisoners at that time was Barabbas, convicted along with others for murder during an insurrection. 8 The mob began to crowd in toward Pilate, asking him to release a prisoner as usual. 9 “Should I give you the King of the Jews?” Pilate asked. 10 (For he realized by now that the leading priests had arrested Jesus out of envy.) 11 But at this point the leading priests stirred up the mob to demand the release of Barabbas instead of Jesus. 12 “But if I release Barabbas,” Pilate asked them, “what should I do with this man you call the King of the Jews?” 13 They shouted back, “Crucify him!” 14 “Why?” Pilate demanded. “What crime has he committed?” But the crowd only roared the louder, “Crucify him!” 15 So Pilate, anxious to please the crowd, released Barabbas to them. He ordered Jesus flogged with a lead-tipped whip, then turned him over to the Roman soldiers to crucify him. 16 The soldiers took him into their headquarters and called out the entire battalion. 17 They dressed him in a purple robe and made a crown of long, sharp thorns and put it on his head. 18 Then they saluted, yelling, “Hail! King of the Jews!”
19 And they beat him on the head with a stick, spit on him, and dropped to their knees in mock worship. 20 When they were finally tired of mocking him, they took off the purple robe and put his own clothes on him again. Then they led him away to be crucified.