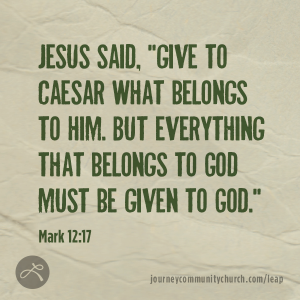 Mark 12:13–27—The traps of the Pharisees and Sadducees

13 The leaders sent some Pharisees and supporters of Herod to try to trap Jesus into saying something for which he could be arrested. 14 “Teacher,” these men said, “we know how honest you are. You are impartial and don’t play favorites. You sincerely teach the ways of God. Now tell us—is it right to pay taxes to the Roman government or not? 15 Should we pay them, or should we not?” Jesus saw through their hypocrisy and said, “Whom are you trying to fool with your trick questions? Show me a Roman coin, and I’ll tell you.” 16 When they handed it to him, he asked, “Whose picture and title are stamped on it?” “Caesar’s,” they replied. 17 “Well, then,” Jesus said, “give to Caesar what belongs to him. But everything that belongs to God must be given to God.” This reply completely amazed them. 18 Then the Sadducees stepped forward—a group of Jews who say there is no resurrection after death. They posed this question:
19 “Teacher, Moses gave us a law that if a man dies, leaving a wife without children, his brother should marry the widow and have a child who will be the brother’s heir. 20 Well, there were seven brothers. The oldest of them married and then died without children. 21 So the second brother married the widow, but soon he too died and left no children. Then the next brother married her and died without children. 22 This continued until all the brothers had married her and died, and still there were no children. Last of all, the woman died, too. 23 So tell us, whose wife will she be in the resurrection? For all seven were married to her.” 24 Jesus replied, “Your problem is that you don’t know the Scriptures, and you don’t know the power of God. 25 For when the dead rise, they won’t be married. They will be like the angels in heaven. 26 But now, as to whether the dead will be raised—haven’t you ever read about this in the writings of Moses, in the story of the burning bush? Long after Abraham, Isaac, and Jacob had died, God said to Moses, ‘I am the God of Abraham, the God of Isaac, and the God of Jacob.’ 27 So he is the God of the living, not the dead. You have made a serious error.”