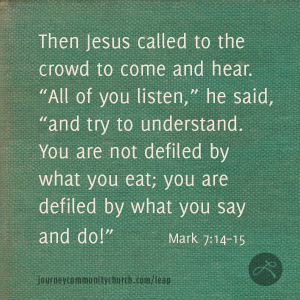 1 One day some Pharisees and teachers of religious law arrived from Jerusalem to confront Jesus. 2 They noticed that some of Jesus’ disciples failed to follow the usual Jewish ritual of hand washing before eating. 3 (The Jews, especially the Pharisees, do not eat until they have poured water over their cupped hands, as required by their ancient traditions.
4 Similarly, they eat nothing bought from the market unless they have immersed their hands in water. This is but one of many traditions they have clung to—such as their ceremony of washing cups, pitchers, and kettles.) 5 So the Pharisees and teachers of religious law asked him, “Why don’t your disciples follow our age-old customs? For they eat without first performing the hand-washing ceremony.” 6 Jesus replied, “You hypocrites! Isaiah was prophesying about you when he said,
7 ‘These people honor me with their lips,
but their hearts are far away.
Their worship is a farce,
for they replace God’s commands with their own man-made teachings.’
8 For you ignore God’s specific laws and substitute your own traditions.” 9 Then he said, “You reject God’s laws in order to hold on to your own traditions. 10 For instance, Moses gave you this law from God: ‘Honor your father and mother,’ and ‘Anyone who speaks evil of father or mother must be put to death.’ 11 But you say it is all right for people to say to their parents, ‘Sorry, I can’t help you. For I have vowed to give to God what I could have given to you.’ 12 You let them disregard their needy parents. 13 As such, you break the law of God in order to protect your own tradition. And this is only one example. There are many, many others.” 14 Then Jesus called to the crowd to come and hear. “All of you listen,” he said, “and try to understand. 15 You are not defiled by what you eat; you are defiled by what you say and do!” 17 Then Jesus went into a house to get away from the crowds, and his disciples asked him what he meant by the statement he had made. 18 “Don’t you understand either?” he asked. “Can’t you see that what you eat won’t defile you? 19 Food doesn’t come in contact with your heart, but only passes through the stomach and then comes out again.” (By saying this, he showed that every kind of food is acceptable.) 20 And then he added, “It is the thought-life that defiles you. 21 For from within, out of a person’s heart, come evil thoughts, sexual immorality, theft, murder, 22 adultery, greed, wickedness, deceit, eagerness for lustful pleasure, envy, slander, pride, and foolishness. 23 All these vile things come from within; they are what defile you and make you unacceptable to God.”