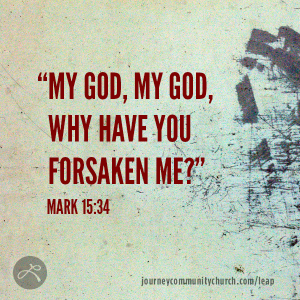 21 A man named Simon, who was from Cyrene was coming in from the country just then, and they forced him to carry Jesus’ cross. (Simon is the father of Alexander and Rufus.) 22 And they brought Jesus to a place called Golgotha (which means Skull Hill). 23 They offered him wine drugged with myrrh, but he refused it. 24 Then they nailed him to the cross. They gambled for his clothes, throwing dice to decide who would get them. 25 It was nine o’clock in the morning when the crucifixion took place. 26 A signboard was fastened to the cross above Jesus’ head, announcing the charge against him. It read: “The King of the Jews.” 27 Two criminals were crucified with him, their crosses on either side of his. 29 And the people passing by shouted abuse, shaking their heads in mockery. “Ha! Look at you now!” they yelled at him. “You can destroy the Temple and rebuild it in three days, can you? 30 Well then, save yourself and come down from the cross!” 31 The leading priests and teachers of religious law also mocked Jesus. “He saved others,” they scoffed, “but he can’t save himself! 32 Let this Messiah, this king of Israel, come down from the cross so we can see it and believe him!” Even the two criminals who were being crucified with Jesus ridiculed him. 33 At noon, darkness fell across the whole land until three o’clock. 34 Then, at that time Jesus called out with a loud voice, “Eloi, Eloi, lema sabachthani?” which means, “My God, my God, why have you forsaken me?” 35 Some of the bystanders misunderstood and thought he was calling for the prophet Elijah. 36 One of them ran and filled a sponge with sour wine, holding it up to him on a stick so he could drink. “Leave him alone. Let’s see whether Elijah will come and take him down!” he said. 37 Then Jesus uttered another loud cry and breathed his last. 38 And the curtain in the Temple was torn in two, from top to bottom. 39 When the Roman officer who stood facing him saw how he had died, he exclaimed, “Truly, this was the Son of God!” 40 Some women were there, watching from a distance, including Mary Magdalene, Mary (the mother of James the younger and of Joseph), and Salome. 41 They had been followers of Jesus and had cared for him while he was in Galilee. Then they and many other women had come with him to Jerusalem. 42 This all happened on Friday, the day of preparation, the day before the Sabbath. As evening approached, 43 an honored member of the high council, Joseph from Arimathea (who was waiting for the Kingdom of God to come), gathered his courage and went to Pilate to ask for Jesus’ body. 44 Pilate couldn’t believe that Jesus was already dead, so he called for the Roman military officer in charge and asked him. 45 The officer confirmed the fact, and Pilate told Joseph he could have the body. 46 Joseph bought a long sheet of linen cloth, and taking Jesus’ body down from the cross, he wrapped it in the cloth and laid it in a tomb that had been carved out of the rock. Then he rolled a stone in front of the entrance. 47 Mary Magdalene and Mary the mother of Joseph saw where Jesus’ body was laid.