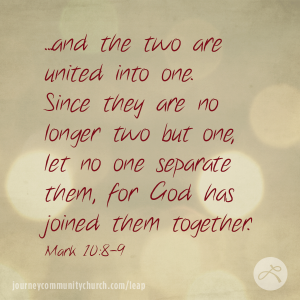 1 Then Jesus left Capernaum and went southward to the region of Judea and into the area east of the Jordan River. As always there were the crowds, and as usual he taught them. 2 Some Pharisees came and tried to trap him with this question: “Should a man be allowed to divorce his wife?” 3 “What did Moses say about divorce?” Jesus asked them.
4 “Well, he permitted it,” they replied. “He said a man merely has to write his wife an official letter of divorce and send her away.” 5 But Jesus responded, “He wrote those instructions only as a concession to your hard-hearted wickedness. 6 But God’s plan was seen from the beginning of creation, for ‘He made them male and female.’ 7 ‘This explains why a man leaves his father and mother and is joined to his wife, 8 and the two are united into one.’ Since they are no longer two but one, 9 let no one separate them, for God has joined them together.” 10 Later, when he was alone with his disciples in the house, they brought up the subject again. 11 He told them, “Whoever divorces his wife and marries someone else commits adultery against her. 12 And if a woman divorces her husband and remarries, she commits adultery.”