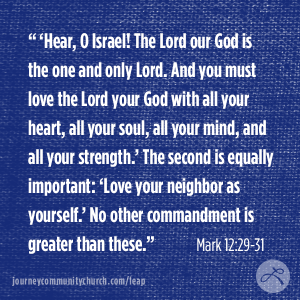 Mark 12:28–44—The most important commandment

28 One of the teachers of religious law was standing there listening to the discussion. He realized that Jesus had answered well, so he asked, “Of all the commandments, which is the most important?” 29 Jesus replied, “The most important commandment is this: ‘Hear, O Israel! The Lord our God is the one and only Lord. 30 And you must love the Lord your God with all your heart, all your soul, all your mind, and all your strength.’ 31 The second is equally important: ‘Love your neighbor as yourself.’ No other commandment is greater than these.” 32 The teacher of religious law replied, “Well said, Teacher. You have spoken the truth by saying that there is only one God and no other. 33 And I know it is important to love him with all my heart and all my understanding and all my strength, and to love my neighbors as myself. This is more important than to offer all of the burnt offerings and sacrifices required in the law.”
34 Realizing this man’s understanding, Jesus said to him, “You are not far from the Kingdom of God.” And after that, no one dared to ask him any more questions. 35 Later, as Jesus was teaching the people in the Temple, he asked, “Why do the teachers of religious law claim that the Messiah will be the son of David? 36 For David himself, speaking under the inspiration of the Holy Spirit, said,

‘The Lord said to my Lord,

Sit in honor at my right hand

until I humble your enemies beneath your feet.’

37 Since David himself called him Lord, how can he be his son at the same time?” And the crowd listened to him with great interest. 38 Here are some of the other things he taught them at this time: “Beware of these teachers of religious law! For they love to parade in flowing robes and to have everyone bow to them as they walk in the marketplaces.
39 And how they love the seats of honor in the synagogues and at banquets. 40 But they shamelessly cheat widows out of their property, and then, to cover up the kind of people they really are, they make long prayers in public. Because of this, their punishment will be the greater.” 41 Jesus went over to the collection box in the Temple and sat and watched as the crowds dropped in their money. Many rich people put in large amounts. 42 Then a poor widow came and dropped in two pennies. 43 He called his disciples to him and said, “I assure you, this poor widow has given more than all the others have given. 44 For they gave a tiny part of their surplus, but she, poor as she is, has given everything she has.”