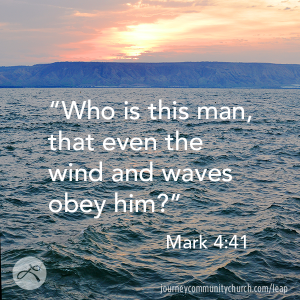 35 As evening came, Jesus said to his disciples, “Let’s cross to the other side of the lake.” 36 He was already in the boat, so they started out, leaving the crowds behind (although other boats followed). 37 But soon a fierce storm arose. High waves began to break into the boat until it was nearly full of water. 38 Jesus was sleeping at the back of the boat with his head on a cushion. Frantically they woke him up, shouting, “Teacher, don’t you even care that we are going to drown?” 39 When he woke up, he rebuked the wind and said to the water, “Quiet down!” Suddenly the wind stopped, and there was a great calm. 40 And he asked them, “Why are you so afraid? Do you still not have faith in me?” 41 And they were filled with awe and said among themselves, “Who is this man, that even the wind and waves obey him?” 5:1 So they arrived at the other side of the lake, in the land of the Gerasenes. 2 Just as Jesus was climbing from the boat, a man possessed by an evil spirit ran out from a cemetery to meet him. 3 This man lived among the tombs and could not be restrained, even with a chain. 4 Whenever he was put into chains and shackles—as he often was—he snapped the chains from his wrists and smashed the shackles. No one was strong enough to control him. 5 All day long and throughout the night, he would wander among the tombs and in the hills, screaming and hitting himself with stones. 6 When Jesus was still some distance away, the man saw him. He ran to meet Jesus and fell down before him. 7 He gave a terrible scream, shrieking, “Why are you bothering me, Jesus, Son of the Most High God? For God’s sake, don’t torture me!” 8 For Jesus had already said to the spirit, “Come out of the man, you evil spirit.” 9 Then Jesus asked, “What is your name?” And the spirit replied, “Legion, because there are many of us here inside this man.” 10 Then the spirits begged him again and again not to send them to some distant place. 11 There happened to be a large herd of pigs feeding on the hillside nearby. 12 “Send us into those pigs,” the evil spirits begged. 13 Jesus gave them permission. So the evil spirits came out of the man and entered the pigs, and the entire herd of two thousand pigs plunged down the steep hillside into the lake, where they drowned. 14 The herdsmen fled to the nearby city and the surrounding countryside, spreading the news as they ran. Everyone rushed out to see for themselves. 15 A crowd soon gathered around Jesus, but they were frightened when they saw the man who had been demon possessed, for he was sitting there fully clothed and perfectly sane. 16 Those who had seen what happened to the man and to the pigs told everyone about it, 17 and the crowd began pleading with Jesus to go away and leave them alone. 18 When Jesus got back into the boat, the man who had been demon possessed begged to go, too. 19 But Jesus said, “No, go home to your friends, and tell them what wonderful things the Lord has done for you and how merciful he has been.” 20 So the man started off to visit the Ten Towns of that region and began to tell everyone about the great things Jesus had done for him; and everyone was amazed at what he told them.