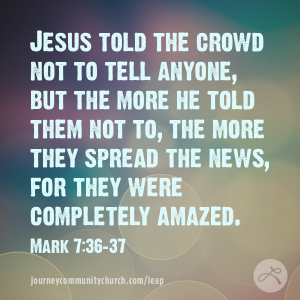 24 Then Jesus left Galilee and went north to the region of Tyre. He tried to keep it secret that he was there, but he couldn’t. As usual, the news of his arrival spread fast. 25 Right away a woman came to him whose little girl was possessed by an evil spirit. She had heard about Jesus, and now she came and fell at his feet. 26 She begged him to release her child from the demon’s control. Since she was a Gentile, born in Syrian Phoenicia, 27 Jesus told her, “First I should help my own family, the Jews. It isn’t right to take food from the children and throw it to the dogs.” 28 She replied, “That’s true, Lord, but even the dogs under the table are given some crumbs from the children’s plates.” 29 “Good answer!” he said. “And because you have answered so well, I have healed your daughter.” 30 And when she arrived home, her little girl was lying quietly in bed, and the demon was gone. 31 Jesus left Tyre and went to Sidon, then back to the Sea of Galilee and the region of the Ten Towns. 32 A deaf man with a speech impediment was brought to him, and the people begged Jesus to lay his hands on the man to heal him. 33 Jesus led him to a private place away from the crowd. He put his fingers into the man’s ears. Then, spitting onto his own fingers, he touched the man’s tongue with the spittle. 34 And looking up to heaven, he sighed and commanded, “Be opened!” 35 Instantly the man could hear perfectly and speak plainly! 36 Jesus told the crowd not to tell anyone, but the more he told them not to, the more they spread the news, 37 for they were completely amazed. Again and again they said, “Everything he does is wonderful. He even heals those who are deaf and mute.”